Today’s blog was written by Serife, a member of the PP-Cyprus Leadership Development Program.

It was Friday morning, and I was pretty excited and scared at the same time for our JDP Retreat in Agros. The reason I was scared is that the camp would my first camp that I was coaching and I was not sure how the juniors would act, and I was preparing myself for the worst scenario. I was telling myself “Get ready Serif, they won’t listen to you, they will be spoiled and they will not care about your feelings”. When I arrived at the meeting point, most of the parents were waiting with their children. I already knew some of the parents, but had a chance to meet new ones as well. All the parents were pretty friendly, and I earned their trust to look after their children. This really made me happy and relaxed, and I got more confident about coaching.

Me leading classroom and on the court sessions!

During our bus drive I was talking with the juniors non-stop. After our short drive (for me, not for the other juniors on the bus, I guess), we arrived at the fancy hotel that we would stay. Our first day was not pretty tough because first we settled in and found our rooms, and then welcomed everyone at the conference room. During the welcome, I translated the activities to Turkish which was fun and easy for me, because that was my only responsibility for that particular event. After that, everyone ate their dinner and we played scavenger hunt which was fun for everyone. This part was a little bit tough though, because we tried to make them gather and see the teamwork spirit, and even though some of them got too competitive, it actually went pretty well and everyone had fun.  Afterwards they had free time and went to bed (I should admit that it was hard to make them go to the bed). When they all went to the bed, we (the coaches), met to talk about that day and what should we improve for them to have a better camp. This was pretty helpful for our next day to be more successful.

The next day was way harder and fun. After we had our breakfast we walked to the indoor court which is down the hill. We taught the juniors basics of basketball which are defense, shooting, passing and dribbling. It was so tiring and also fun. My struggle starts at this point. After we arrived to the hotel we played educational games that teach important aspects such as teamwork. My team started out losing the first couple games, and they became so bored and they gave up. I talked to them, I said: “Let’s keep playing guys, don’t you keep playing at a basketball match while you are losing?” and they answered “We don’t keep playing if the score difference is 30 points”. I was angry and I stepped away and so I could try to calm down. I calmed down in a minute and went back. I said to them “Look guys, the aim is to have fun, not to win. In addition, think of it as our lives, we come across many difficulties in a short period but we need to learn how to stay strong and keep doing our best”. They looked totally fine and surprisingly understood everything I said. Shortly after, they started winning and they kept winning and winning over and over again. I got really happy and was honored. After our successful games, we played basketball, where I was a referee, which was a great experience of mine. 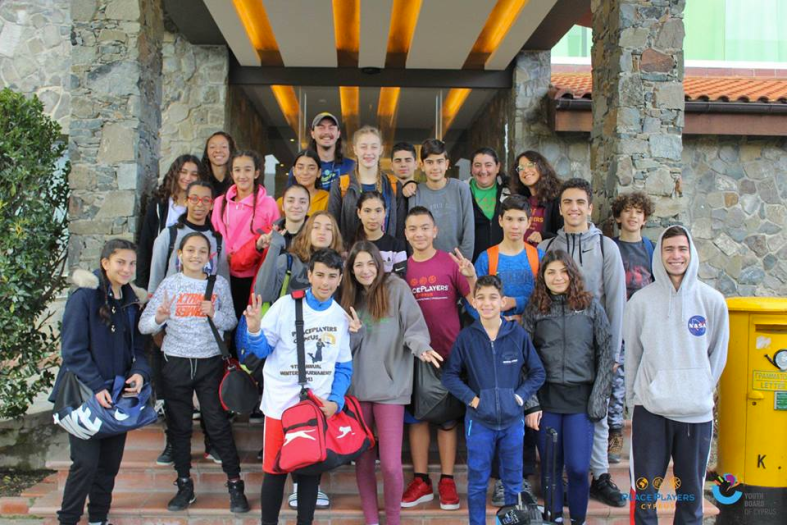 I was communicating with the parents of the juniors during the camp and they were pretty kind. I was making sure that they were in contact with their parents. They had free time after basketball, and they had the option to go play board games, but I wasn’t expecting them to come because they were tired. But they did come, which made me so happy and we all played together. After we had our delicious dinner which made us all full, we had many small games that all of the juniors enjoyed them a lot. Their faces were worth watching, even their eyes were smiling. Then they had a break and during some of the juniors were sitting at their rooms being sad and I cheered them up and made them join us which made me really satisfied.  On that day they went to the bed so much easier since they were tired. Coaches had a meeting about day two and everyone was pretty grateful about the day, and how successful it was.

On our last day, we had a tournament which I was a referee again. It was good, except the mistake I made; it was both so funny and embarrassing at the same time. My team was playing on the other court (that I wasn’t reffing) and it was a really tough game and I got distracted. My team won and I blew the whistle to celebrate, forgetting that I was reffing. Everyone was looking at me, but fortunately the game I was reffing ended at the same time so I ended the game by chance (I know it is so embarrassing). I learned that I need to be more focused there. Our team became the champion of the tournament and everyone on our team was really happy.

At the end of the camp, we had an award ceremony which was blast. Every coach and some juniors gave speeches, which were pretty emotional. We showed our appreciation for one another. I was a pretty tough coach on the juniors, so I wasn’t expecting them to like me a lot, but some of them said that I am their favorite coach and I was at the top of the world. That was the time I decided I definitely need to continue being a coach in PeacePlayers. I think the key to be liked is not letting them do all they want. I was a tough coach, but I was like their friend at the same time and they could talk about everything with me. I learned so many things from juniors and I hope they did as well, and I hope that they had fun. In addition I hope I was a good role model for them to be successful leaders in the features. The experiences I gained are priceless.

PeacePlayersIntlThe Lessons I Learned at the Junior Development Program Retreat02.11.2019

One week from today is Giving Tuesday!